If you think you’re too old to get a tattoo, think again. Studies show that almost 30% of people getting tattoos are adults between the ages of 40 and 50. A smaller percentage of 16% are those over the age of 50, deciding to go for a tattoo. But, several questions need to be answered when it comes to this topic. Why is it that adults or older people are only now getting tattoos? And why is this such a taboo topic?

In the following paragraphs, we’ll take an honest look at the relationship between age and the tattoo. We’ll also tackle the cultural aspect of getting a tattoo at an older age, and what it actually represents for the person getting tattooed. So, without further ado, let’s get started!

Too Old To Get A Tattoo? – Discussion

1. Let’s Look At Reasons People Get Tattoos At Older Age

Younger adults, or millennials, aren’t really aware or interested in the way things were before the Internet. Nowadays it is completely normal to do whatever you want to your body, and no one will judge you. However, 40/50 years ago the situation was different. Getting tattooed was deemed either sinful or often associated with something described as a low-life, criminal, etc.

Overall, tattoos were closely related to bad behavior, doing drugs, committing a crime, even if that wasn’t the case. So, people who were growing up in such a cultural environment didn’t really have the chance to get a tattoo and express themselves for the sake of social and cultural acceptance.

Now, those young people have grown up to be 50/60, and times have changed. Getting a tattoo is a sign of self-expression, and it is not generally associated with bad behavior or crime, at least here in the West. So, people are doing what they’ve always wanted to do; they finally get a tattoo.

However, it seems that there are still people who find this action a bit out of place or not in line with ‘one’s age’. Such judgment usually comes from other older adults who haven’t changed their perception and mindset ever since their own youth.

But, those getting tattoos are usually people who don’t get bothered by other people’s random and mindless judgment. They finally got to do what they wanted for decades, or they’ve just decided that getting a tattoo is a perfect way to honor their own lives, lives of their loved ones, or whatever other reason might be.

So, if we have to sum up reasons older people (adults) get tattoos, we’d say;

Now, if there is one reason some people should NOT get tattoos in their old age, then it would be the age-related skin change. It is no secret that, as we get older, our skin ages with us. It looses its youthful elasticity and it becomes thinner, softer, and more fragile. The older we get, the harder it is for our skin to bear any ‘trauma’ or damage, especially when it comes to tattoos.

Getting a tattoo is often referred to as a medical procedure, where the skin is being treated, damaged and it has to heal, just like a wound. But, with age, the skin finds it harder to heal properly and fast enough, so getting a tattoo at, let’s say 50, might be really challenging.

Let’s take as an example a highly detailed tattoo, and someone of the age, let’s say 50, wants to get it. This means that the tattoo artist will have to use specific tattoo guns and needles to penetrate the skin and inject ink repeatedly. Detailed tattoos are generally very intricate and tough on the skin. But, the skin of a 50-year old person is generally softer and less elastic. So, the needle penetration will be much tougher to execute, which may compromise the tattoo and especially the detailing.

Some tattoo artists will be rather persistent and work on softer, older skin. But, in the majority of cases, this results in a phenomenon known as ‘blowout’. This means that the needle couldn’t penetrate the skin properly, and inject ink below the surface. So, as a result, the tattoo looks smudged, and not good at all.

So, let’s point one thing out; you are not too old to get a tattoo, regardless of age. However, the age of your skin and its condition may compromise the tattoo. So, bear in mind that the tattoo may not look as clean and detailed as it does on the skin of a 20-year old person. 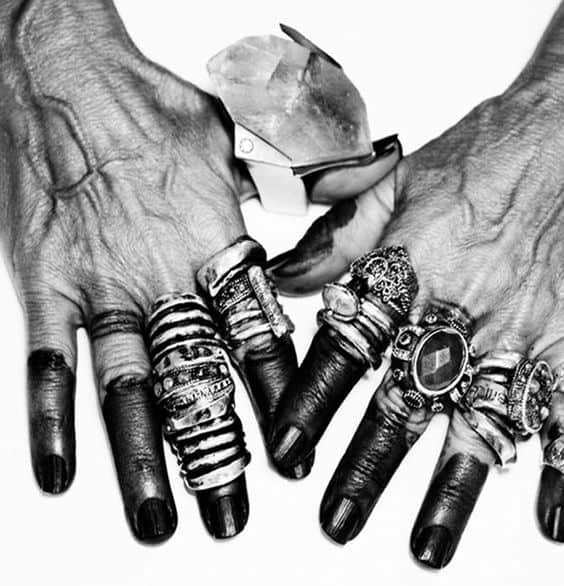 (Michele Lamy is 77; she is a French culture and fashion icon known for her incredible hand and finger tattoos, as well as the line tattoo on her forehead.) If you had low pain tolerance at the age of 20, you will have the same low pain tolerance at the age of 50. The pain of tattooing stays probably the same throughout life, it is just the matter of the body placement of the tattoo, and the fact that some areas hurt more than the others. It is not believed that tattooing starts hurting more with older age.

But, if you’ve never had a tattoo before, you should know that, as we mentioned, some areas can hurt a lot, while others only cause mild discomfort. So, the areas that will hurt like hell, regardless of age are; ribs, chest/breast, underarm region, shins, feet, wrists, ankles, etc. So, any bony area that has thin skin or a lot of nerve endings will surely hurt like hell while getting tattooed.

If you want to get a tattoo, but you have low pain tolerance, we recommend you go for regions that have thick skin or body fat, like the upper thigh/buttock area, calf, bicep area, abdomen area, upper back, etc. Overall, tattoo pain often resembles bee sting, which is described as low to moderate pain.

4. Pros And Cons Of Getting A Tattoo (When You’re Older)

Getting inked at an older age is a great way to rebel against time, age, and all the things considered taboo for older adults. You can fight time and honor your older, more mature self by doing whatever you want and stay unbothered by other people’s thoughts and judgments. Be the cool parent/grandparent you’ve always wanted to be!

If you feel like you need to express yourself or be spontaneous or rebellious, then don’t think about your age. Think about what the tattoo means and how it will make you feel. Tattoos are a form of art, so regardless of your age or who you are, getting a tattoo can only be another great thing you got to experience in your life. Tattoos are just as valid at the age of 25 as they are at the age of 65, and you should always remember that!

6. Tips For Seniors Getting Tattoos

So, are you too old to get a tattoo? Probably not! If you want to get a tattoo, then forget about your age and just go for it. Sure, there might be some risks of getting a tattoo at an old age, like skin damage and bleeding, this doesn’t mean that you shouldn’t get one. Sure, you’ll have to take care of your skin and tattoo more than usual, but after several weeks your skin will recover and the damage will heal.

However, we do recommend you see a dermatologist or your doctor before getting a tattoo. Make sure to discuss the condition of your skin and whether it is suitable for a tattoo. Some people might experience ink allergies as well, so it is essential to talk to professionals before such major decisions.