Getting a new tattoo can be a difficult process, especially if you’re looking for design inspiration in foreign cultures. Sometimes, people want to show off their appreciation of a certain culture by going for its traditional symbols as a tattoo design. But, this is usually where things get tricky.

Sometimes, certain cultural symbols are only reserved for the members of the specific community and can be culturally appropriative when used by someone outside the said community. Other times the symbols can be offensive and inappropriate, or even used by hate groups to show off supremacy and racism. That is why, prior to getting a tattoo, it is important to do thorough research.

Now, chances are that, if you’re reading this, you’re looking to get a Nordic-inspired tattoo, which is cool. But, there are certain Norse symbols you should definitely stay away from. So, without further ado, let’s take a look at the Nordic tattoo symbols you should avoid!

Nordic Symbols To Avoid Getting Tattooed

Odin is the main god in Norse mythology and probably the best-known Nordic mythological god around the world. It serves as an inspiration for all things Nordic as well as for different characters, games, movies, and of course, designs. Odin is known as a war God as well as a symbol or god of death.

As such, he is often depicted as a warrior, surrounded by ruins or Valhalla. Because of such symbolism, some people see Odin as the patron of warriors, rulers, as well as outlaws. Such symbolism of course attracts problematic people in real life, which brings us to the actual reason you should avoid getting an Odin tattoo.

Well, it is known that some white supremacist groups use Odin or Odin’s two ravens, Huginn and Muninn, as their main symbol. The two ravens are often placed on white flags to symbolize the wards that will be led to defend the white race, religion, and other things associated with white supremacy, like racism.

So, unless you want to be associated with the Ravens of Odin group, then you should definitely avoid getting an Odin or Odin’s ravens tattoo. These symbols are even questionable in the Scandinavian countries, so make sure to keep this in mind. The designs could be offensive and considered racist.

Thor’s hammer is probably one of the most recognizable symbols of Nordic mythology. It is an Old Norse symbol that got popularized by the modern superhero movies and adaptation of Nordic mythological stories. However, this hammer symbol isn’t only a harmless mythological symbol. Because of its significance and symbolism, Thor’s hammer is nowadays adopted by outlaw biker groups and white supremacist groups in Europe, North America, and elsewhere. 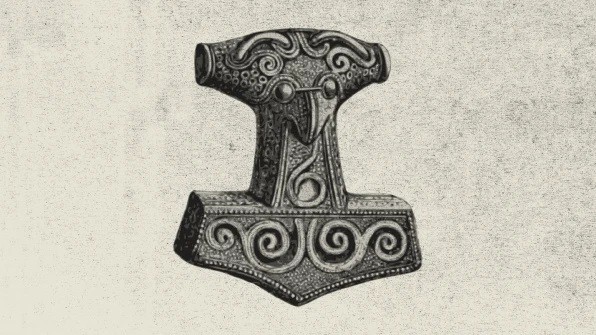 Now, experts in the Nordic mythology and Viking history don’t think people should stop going for Thor’s hammer symbolism. They believe people should reclaim the ‘hammer’ from the hate groups and groups that try to ruin Viking heritage.

However, it’s not really recommended to get Thor’s hammer tattoo, especially if it’s really visible. You could be easily associated with the hate groups and considered a hate-mongering member of the community. But, if you do follow the advice of the experts and do decide to go for this tattoo design, make sure to have an explanation ready in case someone finds your tattoo offensive.

Valknut is a Norwegian word used to describe three interlocking triangles. The word translates as ‘knot of slain warrior’, and the symbol is associated with the god Odin as well as with war, death, and the dead. Above all, Valknut generally symbolizes the afterlife as well. Unfortunately, this symbol is nowadays used by hate groups, neo-Nazis, and white supremacists to show off their readiness to fight and loyalty to the white power group.

Valknut is also one of those symbols that was stolen by the Nazis, and to this day is associated with neo-Nazi groups in Germany. The Valknut symbol is often accompanied by Thor’s hammer or the Odin imagery to further turn these initially benign symbols into symbols of hate, racism, and white supremacy.

Viking Triskelion is a Norse Viking symbol depicting three interlocked horns. It is similar to the Valknut symbol, instead of war and death, Triskelion symbolizes rotational symmetry. As such, one would think that this symbol wouldn’t be misused by the hate groups, but, unfortunately, it was and still is used by the ‘outlaws’.

Unfortunately, the Vikin Triskelion is a common tattoo choice for the far-right activists and white supremacists in the USA as well as in European countries. The Triskelion is also associated with Nazis since they tend to ‘borrow’ Nordic symbolize to create Nazified imagery and even Nazified tattoos.

One of the main symbols of Scandinavian or Nordic heritage is the Sonnenrad or the sun-wheel. Unfortunately, just like any other prominent Nordic symbol, this one is also used or associated with far-right, hate groups, white supremacists, and neo-Nazis in the USA and European countries.

Othala is a rune symbol that represents the sound ‘o’ and symbolizes ancestry, ancestral inheritance, legacy, estate, and so much more. This rune symbol is characteristic of pre-Roman Europe, as well as Norse and Germanic people before they adopted the Latin alphabet.

Nowadays, the Othala rune symbol can be found in the emblems of white nationalists in Europe and the USA. The symbol is, of course, once again abused for the purpose of spreading and showcasing hatred and racism, as well as white supremacy or even neo-Nazi tendencies.

We know that is a really cool symbol which would be an excellent choice for a tattoo. But, unless you want to be associated with hate groups and white supremacists, you’ll avoid getting this symbol as a Norse-inspired tattoo. Overall, it can be pretty risky to get a rune tattoo, since runes tend to be misused by hate-, far-right groups. So, if you do want to get one, make sure to even triple-check the meaning, possible hate group association, and the spelling, of course.

Yggdrasil is a sacred ash tree in Norse cosmology. It is believed that everything exists around this tree, including the so-called Nine Worlds, or the Norse Cosmos. Yggdrasil is believed to translate as ‘Odin’s horse’, however, this is not the officially accepted translation. This tree was rarely mentioned by the Vikings, but Nordic literature and art have been incredibly inspired by this tree.

Overall, Yggdrasil is an immensely important symbol in Nordic mythology, as well as culture. This has made it, of course, the target of the global hate groups, far-right groups, and white supremacists, as a symbol to represent their beliefs.

Why Should You Avoid The Nordic Symbols as a Tattoo Design

Generally speaking, a lot of the Norse mythology and Viking culture is being misused for the purposes of spreading hate ideology, which has nothing to do with the Norse or Nordic tradition. Hate groups, nowadays and in the past, used to take initially harmless symbols and turn them into symbols of an ideology.

For example, Adolf Hitler did the same with the Swastika symbol. This is actually a symbol of an ancient religious icon in the Eurasia cultures. It is a ‘well-being’ symbol that has been and still is used by Hindus, Buddhists, and Jains. Unfortunately, with the rise of Nazism in the 1930s, and World War II, the world now associates the Swastika with Hitler and Nazism.

It has been noted that many current far-right activists in the USA, Europe, and even Australia and New Zealand use Nordic symbolism, or the symbolism of a Viking warrior to depict their extremist believes and ideology. One of the most prominent examples of that would be the leader of the Capitol riot, Jacob Chansey.

So, these are generally the main reasons you should avoid the aforementioned Norse symbols for your new tattoo. You could be easily associated with hate groups, far-right or white supremacy groups. You could be perceived as racist, offensive, xenophobic or homophobic.