Scott Campbell: One of The Best Tattoo Artists In The World

Are you thinking about getting your next tattoo and want to go for a high-quality one? Well, chances are that you’ve come across Scott Campbell’s artworks.

This article is about one of the most talented artists, Scott Campbell. We will discuss every small aspect you need to know about Scott Campbell, his designs, his specialties, how much he charges, or even how you can contact him. Most of you might have already heard about this well-known artist. However, with our article, you will learn a lot more about him.

Who is Scott Campbell?

Scott Campbell is a New York-based famous American tattoo artist who was born in May 1977. He had many celebrity clients like Howard Stern, Mark Jacobs, Courtney Love, and more. He is a well-known artist in the glossy fashion world, especially by tattoo lovers.

As we talk about the tattoo star’s early life, he got brought up in Louisiana, in a conservative family. He studied biochemistry at the University of Texas, but as he realized it was not for him, he stopped thinking about it and eventually changed his career path.

His career as a tattoo artist began in San Francisco. He traveled to Asia and Europe and earned success in tattooing. In 2005, he shifted to New York and started his tattoo shop. Scott Campbell is one of the most recognized artists in the tattoo world. His unique work grabs the attention of people from all around the world.

Where to Find Scott Campbell Online?

Campbell’s official website is Scott Cambell Studio. The website displays all his pieces of work from the art exhibitions and you’ll be able to purchase his most popular paintings. As expected, you can easily find Scott Campbell’s imagination through the site.

Last but not least, Scott Campbell is also the co-founder of the cannabis brand Beboe.

Lastly, you can contact him through Facebook as well. His profile is the perfect place (after Instagram) to see his pieces of work, the latest tattoos inked, and more.

Where To Book An Appointment With Scott Campbell?

The best way to book an appointment is through Campbell’s official website. You can check the various options available for you and his blog to get ideas. Apart from that, his Instagram and Facebook pages are also an excellent way to contact him.

How Much Does Scott Campbell Charge?

As you could expect from an internationally known tattoo artist, Scott Campbell’s rates aren’t cheap. However, if you’re willing to get some of the best tattoos you can think of, it is justified and recommended.

According to a report by Brobible who questioned his rates, Scott Campbell charges his clients $1,000 per hour. However, after the first session, you’ll get a massive discount and eventually only pay $200 per hour. Unfortunately, Scott isn’t currently accepting bookings but, who knows, he might get back to the game sooner than expected.

Of course, the time needed for a tattoo depends on the body part, the color, the design complexity, and the size.

How Much is Scott Campbell Worth?

While it isn’t clear how much Scott Campbell is worth, an analysis by NetWorthList revealed that Campbell was worth $1 million in March 2019.

As mentioned previously, other than tattooing celebrities for a top price, he also had contracts with premium brands such as Louis Vuitton, and, lastly, he’s the co-founder of cannabis brand Beboe.

Of course, he is considered to be part of the A category artists and, and mentioned previously, charges $1000 per hour. The main reason why he’s one of the highest charging artists is the quality of his work and his experience.

What makes Scott Campbell so unique? There are a few reasons why Campbell became so famous in his field. He always manages to develop up-to-date designs and does not keep a single working style. He is a great experimenter too, which is something to keep in mind.

Scott Campbell often comes up with different new designs, not the conservative ones that include geometric lines, rose, skull, eye, flying birds, etc. He can merge any of two or even more objects nicely to bring up a fancy design. Some of his favorite tattoo designs you can check out are the following:

Out of all tattoo designs, skulls are definitely Campbell’s favorites.

There are many occasions in which Campbell uses a skull as part of a design, whether with a rose or a geometric pattern. It’s important to note that the first tattoo that Scott Campbell got inked was of a skull. This could well be the reason for his love for weird designs.

Lastly, whether on the back, on arms, or legs, nothing stops the tattoo artist from producing incredible ink artwork. 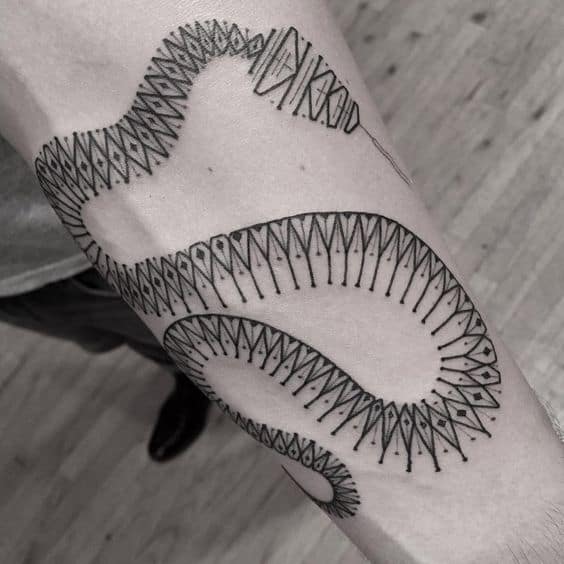 Snakes have been used by Scott Campbell for many different tattoos and we can understand why when we see the quality of his designs. Whether geometrical, more realistic, or using other details, all his designs containing snakes are incredibly beautiful.

Particular and original geometric designs couldn’t miss from Scott Campbell’s collection, and as expected, he inks them incredibly well. His geometric designs usually come in black color only with several lines, triangles, and other shapes. Just like the other tattoos, he doesn’t have problems tattooing those anywhere you want.

Birds are repeatedly used by the artist in many of his tattoos. He became famous when he inked a flying bird tattoo on Health Redger on his forearm.

Flowers are another one of the designs that Scott Campbell uses. While they’re certainly less common and don’t seem to be his favorites, he still inks them impressively well.

According to Scott, tattooing is not something that people consider permanent art forms, so he started working on canvas. While most of the exhibitions he joined are listed on his website, let’s go through the best and most popular ones below.

The Whole Glory exhibition displayed some geometric designs as well as skulls and flowers. Most of his tattoos and representations are in black and white, however, they’re nonetheless out of this world.

He used uncirculated currency sheets for making tattoos, drawings, and sculptures. Also, the ostrich eggshells get utilized for showcasing eye-catching artwork in the Galerie Gmurzynska.

One fascinating thing about this exhibition was that it displayed burnt artwork. Yes, the sold-out artwork got burnt in the exhibition after an argument with the gallery owner. The artistry showed astonishing patterns of smoke. One of the most beautiful among them was a butterfly.

Noblesse oblige is a French expression that obviously inspired Campbell’s art exhibition. It essentially means that we should be generous and remain noble towards those that are less privileged.

Wealthy should give generously to society where needed. Scott organized an exhibition named Noblesse Oblige in Los Angeles in which he displayed his signature artwork on an uncut $1 sheet of American bills and porcelain. The most impressive piece was a 3-D skull made of a stack of $11,00 in cut and un-cut dollar bills.

The first time Scott Campbell came up to showcase his work in the exhibition Made It Rain. The exhibition featured a collection of artworks made of laser-cut $1 bills.

The first-ever tattoo he got on his body was of a skull. He paid $25 at the age of 15 when this was the only money he had. He shares that his body gets almost entirely covered with tattoos, some are colored, some are black, some are good, and few are bad ones.

He says all tattoos have their associated memories. They are a mark of your experiences, and he claims he does not have a problem with the bad ones at all.

Have any of you got anything for free at some point? If yes, this is the happiest feeling in the world, right? Well, while it is certainly rare, Scott Campbell has tattooed many people for free.

Scott Campbell was interviewed by Vice about tattooing customers for free at a Marc Jacobs store on Madison Avenue in New York.

This shows his intense love for art and tattoos. He also claims that he can do tattoos better than anything else. Moreover, he’s more comfortable with tattooing on the skin than doing art on paper or canvas.

Another fascinating fact about Campbell’s artwork is the choice of a wide variety of raw materials. He uses uncut sheets of US currency paper, copper, and graphite for his artwork other than human skin.

Have you thought about how this idea could have come to his mind? And this is the specialty of an artist to go beyond limits and amaze people. His distinctive art of making sculptures on stacks of US dollar bills is a masterpiece.

Connection With His Clients

Have you ever thought about why people get tattooed? The beauty of some images inspires some, or they might have personal feelings attached to it. For sure, it is not without reason.

So, Scott Campbell tries to determine that reason, precisely what the person’s thoughts are. He figures out what kind of tattoo suits the personality of people. Tattooing is not easy because people’s opinions and likings are relative.

In short, Campbell creates a unique connection with his clients and that’s one of the reasons why he became one of the best tattoo artists in the world.

If you wanted to know anything about Scott Campbell, this was everything you could ever know. From his previous private life to his professional pieces and the art exhibitions he attended, we certainly got you covered.

While Scott Campbell is certainly a successful tattoo artist, he’s also an incredible entrepreneur as well as a great human being.

Now that you know the designs he’s best at tattooing, contact Scott Campbell and get yourself one of the best tattoos you could ever imagine.