What Does Clock Tattoo Mean?

We invented clocks to be able to keep track of time and help us plan all the obligations throughout the day and night. However, with the modernization and the normalization of tattoos, clock tattoos became quite popular. There are a lot of different tattoo meanings that are easily comparable to clocks. Some of those meanings are more shallow and regular, while some others are deeper and more abstract.

It was just a matter of time before everyone started inking clocks on their bodies. Everyone invents the meanings and symbolism for the clock tattoos that they consider right and easily applicable to their life. That’s why there are a lot of clock tattoo meanings.

In this article, we’re going to list the most popular clock tattoo meaning, and detail each one of them to the point that will help you familiarize this mystic, yet fascinating objects that help us stay on par with the time, at least partially.

The clock tattoos are considered pretty common and oftentimes also called mainstream. We believe that a lot of people choose the clock tattoo because of its flexibility, with both designs and meanings. You can ink them on any part of the body, either individually, or as part of some larger print and design.

Additionally, there are different types of clocks, starting from wristband watches to the ancient hourglass. The clock tattoos can be interpreted differently. However, we decided to look into some clock tattoo meanings that are popular. These meanings will also help you decide whether you want to get a clock tattoo, and which spot you want to get it on.

The Meaning Behind The Clock Tattoo 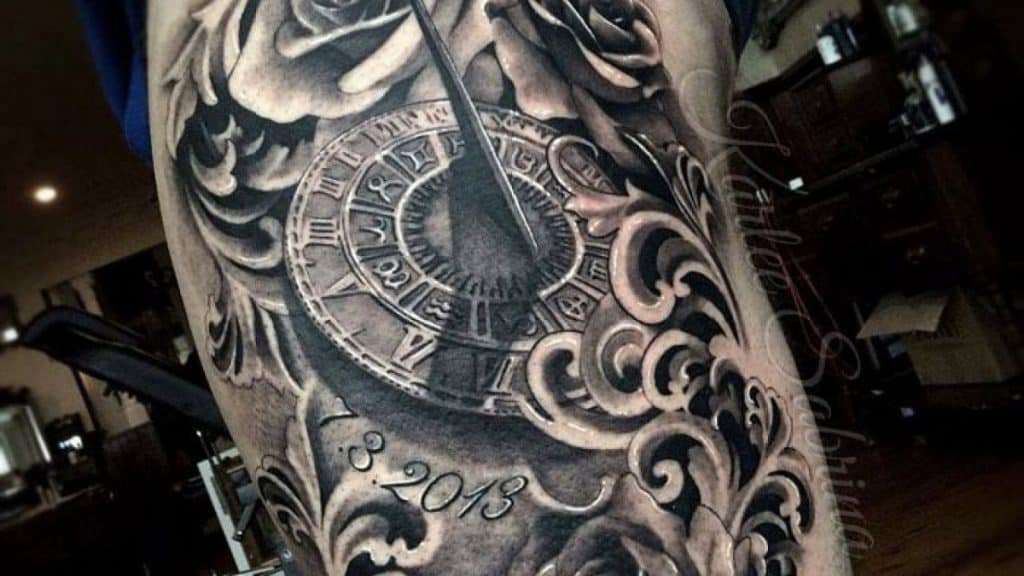 As we mentioned earlier, the meanings behind the clock tattoos are plentiful and different, with many people having their interpretation of clocks and time in particular. Let’s look at both popular and those less popular associations to the clock tattoo.

Sometimes, the meaning of a tattoo with a clock on can be something as simple as time. As we know, the clock is the best representation of time, and those who have difficulties making enough time for family members and loved ones will make a tattoo of the clock to remind them to make more time. Time can’t be controlled, stopped, or manipulated, and many people fascinated by this fact choose to ink a clock on their body.

One of the most popular meanings of the clock is the events of life and death. Clocks helped us get better at the understanding time and little bits of how it works. However, they don’t help us master or control the time. Time moves on, even without us, and that’s why clocks represent the never-ending cycle of life and death.

As time moves, we go through different events that are followed by time, but time passes and we get along and continue going strong even after we’re gone. The clock tattoos with this type of symbolism are there to remind us that no matter how much we’re trying to run away from the time, and everything that comes with it, we can’t escape it and eventually it’s going to surpass us and keep surpassing the future situations.

Those can include flowers, birds, trees, and other animals, anything that can, in your opinion, serve to represent life. In the same fashion, you can use dark elements such as skulls, scythes, and withered trees and plants to emphasize the meaning of death behind the clock tattoo.

Sometimes, it takes time for some things to happen the way we want or expect them to be. For example, if you started your own business, you need to have patience before it grows and yields its first positive results.

The clock tattoos are there to remind us that good things take time to happen and to continue pushing forward and making good choices and decisions before the good things happen to us.

The clock tattoo also manifests patience when waiting for the good news about some event or a person, as well as patience in relationships with other people who may make you feel more or less good.

There is a saying that says that time can heal everything, as long as we wait. The healing and the patience symbolism bits can be combined for people who are recovering from a friendship that fell apart, a heartbreak from the relationship, loss of a job, or some more serious life-threatening condition.

Clocks can also be the sign of endless love, especially if the tattoo is accompanied by a symbolism that marks hearts, and other romantic symbols like flowers, stars, kisses, or two people together.

Usually, clock tattoos symbolizing endless love are tattooed by people who want to mark the loss of their loved ones and their timeless love. Additionally, they are also often tattooed by couples who are separated by distance to help them cope with their long-distance relationship.

Finally, people who believe in their love and its strength usually make a tattoo of the clock with the date of the marriage anniversary or the day they met their significant other.

One of the more obvious meanings of the clock tattoo also includes infinity, the symbol of everlasting, something that the time is too. This type of tattoos is pretty straightforward and also accompanied by other symbols that mean the infinity, such as the infinity sign itself.

People who feel self-assured, strong, and emotionally stable usually mark their state of mind with strong tattoos such as the clock tattoo. These people are aware that they can’t let the time pass by, but do something empowering and inspiring with their life. The clock tattoo is there to inspire them and remind them that nothing lasts forever other than the time itself.

When there were no clocks as we know them today, there were hourglasses that helped people measure the time and organize their activities, whatever they were at that time. In the same way, an hourglass can just be called an ancient clock, but its purpose remains the same as the one with regular clocks.

With that in mind, the hourglass tattoo can mark all the meanings as above, as well as a reminder that the sands of time run out for everyone and encourage people to spend their time wiser. The hourglass tattoos are quite popular among people who appreciate their time and are aware of the human existence aspect of their meaning.

The melting clock can often be found in the abstract artworks of Salvador Dali. The tattoo of a melting clock works in a way to remind people that the time is ticking and to manifest how time is dominant over humanity and that nothing can master it.

According to the meaning behind Dali’s paintings, the melting clock can highlight delusions, and how the experience of time by humanity is wrong and twisted, meaning that we can’t prevail over time no matter how much we want it. The melting clock tattoos are quite popular, especially in the sleeve types of tattoos.

Getting a new tattoo is a huge process, but if you can’t decide whether the clock tattoo is the right one for you, we listed answer to the commonly asked questions about clock tattoos that might help.

Q: What is the cost for the clock tattoo?

Q: Are clock tattoos more for men than women?

A: We believe that the clock tattoo looks acceptable and good on both biological sexes. Nothing in the design of the clock tattoo indicates that it’d fit some certain gender better. However, there are ways to make your tattoo more manly or girly, by adding certain colors, as well as other design patterns or elements. For example, if you want a more girly tattoo, you can add hearts, flowers, butterfly and other fragile and feminine elements.

1 thought on “What Does Clock Tattoo Mean?”