Tattoo Statistics and Interesting Facts: Everything You Need To Know About Tattoos!

For hundreds of years, tattooing has been one of the main ways of self-expression, expression of status in society, a showcase of one’s history and experience, or cultural and artistic interest. Even nowadays tattoos are the main media of body art across the world’s cultures, achieving mainstream status.

Tattooing in its etymology stands for ‘marking oneself’. The word itself originated from the Tahitian word ‘tatau’ (which means ‘mark’) and has been ‘discovered’ and brought into use by the British explorers in the 18th century, the first one being Captain Cook who brought the word back home.

We believe that before you get an appointment at a tattoo shop, you should first get informed and educated on everything tattoo. Therefore, in the following paragraphs, we’ll share some interesting statistics, facts, and less-known information about tattoos and the art of tattooing.

If this sounds interesting, then just keep scrolling.

The oldest evidence of a human tattoo is believed to be from between 3370BC and 3100BC. How do we know this? Well, in 1991, the world’s oldest human mummy has been discovered in the Otzal Alps, between Italy and Austria.

The mummy has been named Otzi the Iceman. As counted by the experts, the mummy had 61 tattoos all over the body, mainly on his knees, the kidney area, and the ankles. 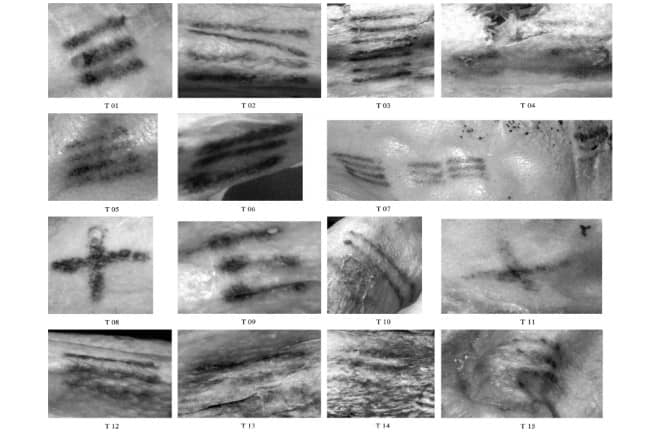 (Some of the Iceman’s tattoos, mapped and photographed by scientists))

Scientists and experts found that Otzi was tattooed by fire ash. Further analysis has discovered that Otzi may have lived between 3370BC and 3100BC, making him the oldest human mummy to still exist.

Scientists around the world have discovered tattoo-covered human remains in approximately 49 locations; from Alaska, Greenland, Egypt, Russia to China and the Philippines. Some of the human remains are believed to date back to 2000BC.

One of the first people to recognize tattooing in Europe was the Greeks. They used tattoos as a way to smuggle secret messages during the time of warfare. The records of such practices were found in records of a Greek historian from the 5th century BC. His name was Herodotus.

Herodotus talked about how people sent secret messages in form of tattoos. One such example is the story of Histiaeus of Miletus, who was a Greek Ruler in the late 6th century BC, often referred to as the Tyrant.

He would force his slave to shave his head, which would later be tattooed with the secret message. Once the slave’s hair has fully grown (and tattoo hidden), the slave would be sent to Histiaeus’s son, who would shave the slave’s head and read the message.

Some of the ancient tattooing practices included hand-poking (hand-poking ancient form of ink with a stick into the skin), as well as tattoo removal methods, like holystoning.

Now, holystoning was practiced by European missionaries in the Cook Islands in the South Pacific Ocean. It is believed that they were trying to remove their tattoos by using sandstone to scrub them off of the skin. This practice was referred to as ‘holystoning’.

Now that we mentioned European missionaries in the South Pacific Ocean, we might as well tackle the issue of ‘tattoo collection’ done by Europeans in today’s New Zealand region. Well, New Zealand was occupied by the indigenous Polynesian people known as the Maori. The Maori people were known for their Ta moko permanent skin marking, nowadays known as tattooing.

Unfortunately, as Europeans started visiting (and staying) in the New Zealand region in the 18th and 19th centuries, they started to colonize the region and contribute to the intertribal warfare of the Maori.

As a result of the warfare, Europeans started to collect tattooed Maori heads and body parts. This practice became so popular, it was considered souvenir-gathering for the Europeans back home, and one more reason for the Europeans to start murdering the Maori people themselves.

When James Cook returned to England after his travels in the 18th century, he didn’t know that he was bringing a cultural change with him as well. As Europeans become familiar with overseas traditions and cultures, tattoos quickly became a symbol of ‘exploration’.

In the beginning, tattoos were seen as marks of noble savagery, as Europeans often referred to anyone non-European and indigenous. Tattoos were considered a sign of inferiority and lack of civilization.

Soon after, sailors, who have traveled to ‘exocit’ countries started getting tattoos. And, as monarchs and rich members of the English society started traveling as well, tattoos turned from signs of inferiority to signs of adventure and souvenirs from the exotic, far-away lands and islands.

As a result, many royals and upper-class members started getting tattoos. King Harold II of England also had several tattoos. King Edward VII received a tattoo during his trip to Jerusalem. His sons, Dukes of Clearance and York (later King George V), also received dragon tattoos during the visit to Japan.

Lady Randolph Churchill, Winston Churchill’s mother also received a small wrist tattoo, and Sir Winston himself followed his mother’s steps and had an anchor tattooed on his forearm.

Other countries’ royalties also followed the trend. Grand Duke Alexis in Russia become the most tattooed man of the 19th century. He embarked on a tattoo journey, traveling around the world and receiving tattoos from master artists. 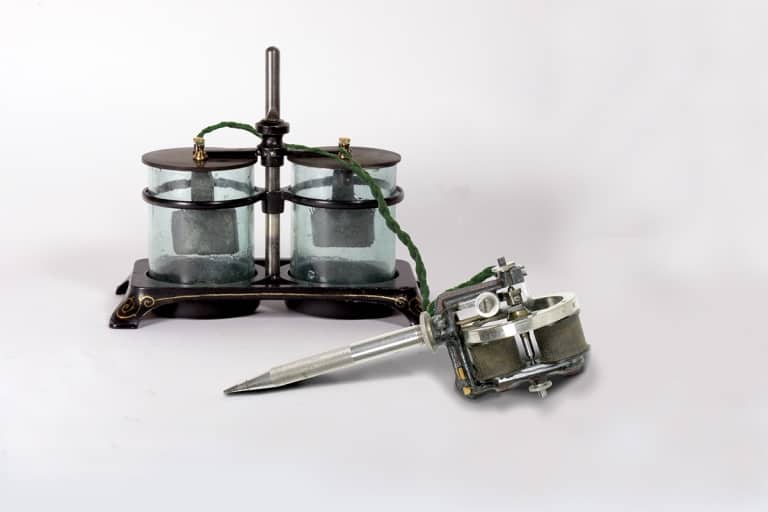 To complete this quick history lesson about tattoos, let’s talk about the electric tattoo pen; a tool indispensable for modern tattooing. The first electric tattoo pen was designed and created in 1891 by Samuel O’Reilly. Mister O’Reilly was inspired by Thomas Edison’s electric stencil pen from 1876, but it didn’t have any needles or an ink reservoir. So, O’Reilly added the required pieces, adapted them to the pen, and the rest is history. 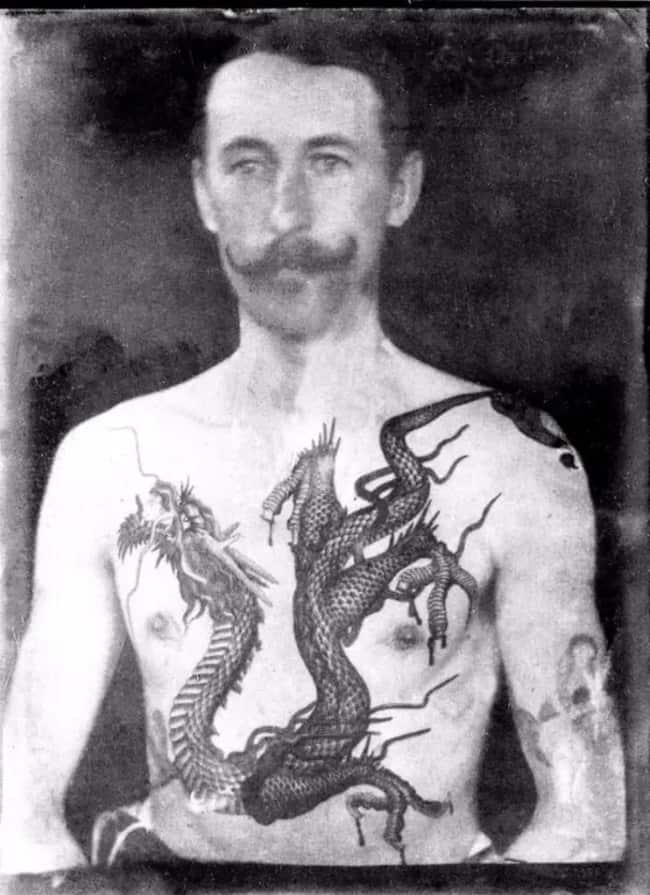 A man named Sutherland Macdonald is believed to be the first reported tattoo artist in the United Kingdom. The man was reported in the Post Office Directory in 1894 as a tattoo artist. Pictures of the man and his own tattoos were found at the National Archives and the zoological archive at Harvard University.

The Modern Tattoo Facts and Stats

Recent research, released by the Oxygen Network and Lightspeed, shows that women are keener on getting a tattoo than men. Approximately 59% of women have at least one tattoo, compared to 41% of men. Considering how short ago it was a taboo thing to do for a woman, it is not surprising to see that women are nowadays being tattooed more than men.

However, compared to men, women are also more likely to regret getting a tattoo and decide to get it removed. The majority of women also remove their tattoos because of social stigma, their job, or embarrassment.

During a tattoo session, your skin is pierced by the tattoo needle between 50 and 3000 times per minute. The needle enters the skin, reaches the 2nd layer known and the dermis, and creates a vacuum hole. Once the needle exists in the hole, it leaves the ink and closes the vacuum. However, because of so many punctures, the tattoo is considered an open wound for the first 24 to 48 hours and is generally treated like one.

It can take a tattoo anywhere between 2 weeks to several months to completely heal. The reason the tattoo healing process is so approximate lies in the human body. A tattoo heals faster if it’s smaller or if it’s placed on the body where the skin is thicker and there aren’t a lot of nerve endings.

Moreover, the tattoo also heals faster if it’s properly taken care of. Otherwise, the healing of the tattoo may even prolong, which generally affects its final appearance and could lead to a tattoo infection.

When it comes to the best tattoo removal method, it is laser tattoo removal for sure. However, not every tattoo ink is susceptible to easy removal. For example, black ink is the easiest to get rid of because it absorbs more of the laser waves, which heat the ink and disintegrate it. Lighter and brighter colors are hard to get rid of since they do not absorb the laser waves.

Behind The Psychology of Tattooing 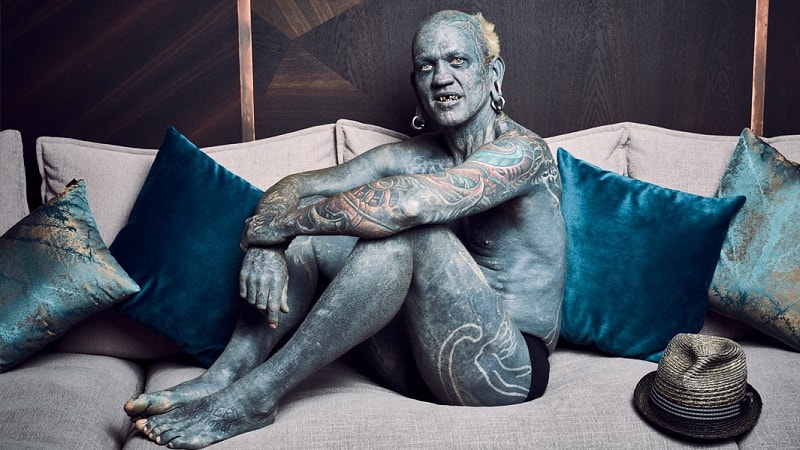 Lucky Diamond Rich is the most tattooed man in the world and holds the Guinness World Record for that title. His entire body (99.9%) is covered in tattoos. Rich is from New Zealand and he started getting tattoos at the age of 16.

It is believed that the most popular tattoo motifs are angels and hearts. Tattoo artists around the world believe the reason these motifs are so widespread and popular is that they bring a sense of spiritual protection, safety, sense of love, and self-empowerment.