Top 10 Tattoo Magazines and Websites You Will Never Read

Did you know that 30 percent of Americans have at least one tattoo?

According to the data supplier, Ipsos, the proportion of Americans who have at least one tattoo grew 9 percent between 2012 and 2019.

We often hear that every tattoo tells a story. If this is indeed the case, we could say that there are over a hundred million stories in the United States alone. This is based on a US population of 328-331 million.

But who tells the stories that all the tattoos out there tell?

Interested in finding out what could have happened to the magazines and websites that are no longer publishing, we follow their history, some of the exciting and controversial stories they carried, and attempt to find out what happened to them.

We select the top ten publications that are no longer publishing by looking at the attention they garnered. We believe that the staying power of a publication is shown by the amount of attention it gets. This attention can be measured by the number of writers, editors, webmasters, and websites that backlink to it. 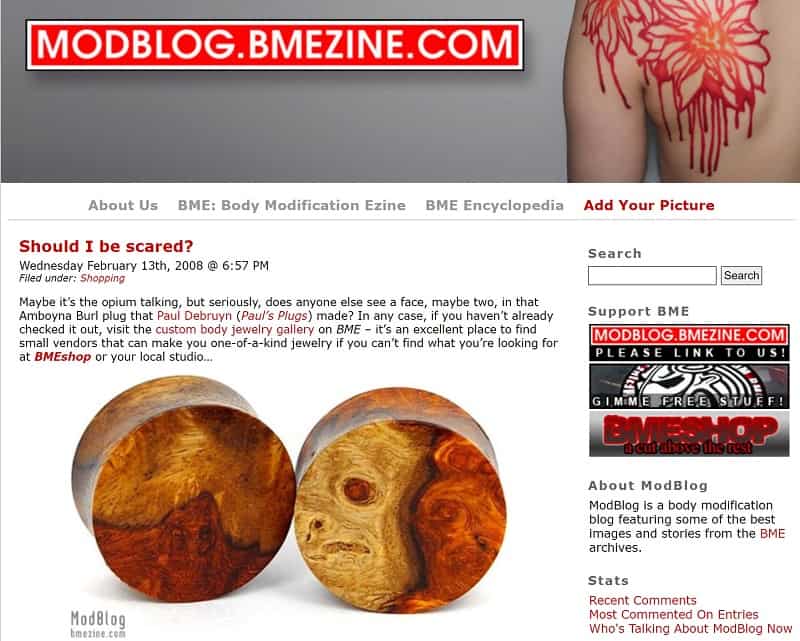 ModBlog is captured online for the first time towards the end of 2005. Reminiscent of this time’s websites, ModBlog is presented in a simple layout.

ModBlog had a watered-down warning: “While generally safe for work, this blog occasionally contains content which is graphic or may not be appropriate for all viewers.”

If the 2005 ModBlog layout is simple, the content you see when you visit the first archived page is quite hectic, with contributors pulling no punches.

A contributor going by the name Shannon Larratti berates the fearmongers who were going around claiming that “anyone who gets a piercing should go get a tetanus shot.” Larratti gives these fearmongers a lesson on tetanus, informing them “that these days a majority of people are vaccinated against it.”

A post from Jordan Ginsberg announces: “Hey, Scar Wars got linked on MetaFilter today! Neat, right? I bet a highly intelligent and thoughtful discussion came about.”

The Ginsberg post triggers some pretty disapproving comments. One comment says, “Those people are so remarkably ill. I wish we lived under a dictator who would kill people who do [things] like that to themselves.”

“GROSS. Gross, gross, gross. My skin is crawling,” says another.

The Redirect Before the Break

By September 2009, Modblog.bmezine.com was redirecting to another website. This redirect seems to have broken sometime at the beginning of 2021. Not much information is available with regards to what could have happened to the blog site.

When a group of Tattoo enthusiasts went out looking for a good tattoo site that did not charge money, they couldn’t find one. With very few choices left, they decided to create their own on January 1, 2007. They called it CheckOutMyInk.com.

Profit Is Good After All

While the tattoo enthusiasts may have been looking for free resources, it is interesting that they listed their company on Crunchbase.com as a “for profit” entity.

Notwithstanding the listing that indicates the website was after profit, CheckOutMyInk.com describes itself as “a free site where people can store their pics online and search for tattoos pics, and at the same time, help build a community.” Adding, “We also want to help tattoo artists and shops promote themselves and show off some of their amazing works.”

A Social Media for Tattoos

If you analyze CheckOutMyInk.com, you will discover that the website resembled a social media site. This is also reflected in the website’s tagline, which reads, “Connecting Tattoos.”

From the website’s home page, you could access several other pages where more than 193,000 members could create profiles under the Members page. Using those profiles, the members could then upload photos.

It looks like the Tattoo enthusiasts who started CheckOutMyInk.com redirected it to another site sometime towards the end of 2020 and forgot to inform everyone else. 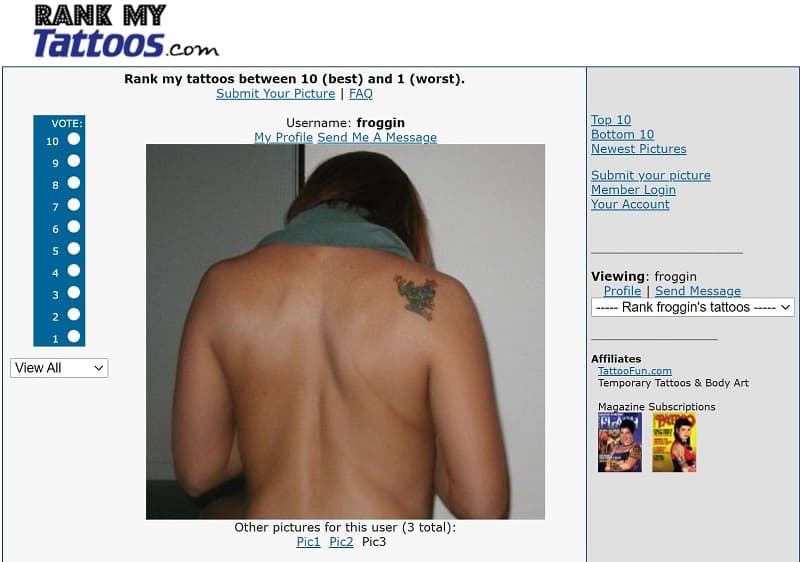 The website called RankMyTattoos.com was established in the second half of 2002. The site’s creators indicated that it was “designed to be a fun way to show your picture and/or vote your opinion of pictures submitted by users of this website.”

Rank My Tattoos permitted users to register profiles. Once you had a profile, you could upload pictures of your tattoos. Other users with profiles could log in and rate your tattoos.

Tattoos could be rated on a scale ranging between 1 (worst) and 10 (best). It looks like the site would tally the ratings received by each tattoo and identify the winning tattoo for the day.

Apart from ranking tattoos, users could also contact members who posted tattoos they liked to request whatever details they may have wanted.

By 2009, RankMyTattoos.com had an improved design, providing many more links to several areas, including a magazine, groups, and designs for sale.

When TattooDesign.com was established in 2000, it described itself as an “online resource center for tattoo-artists and fans.” Visitors to the website were also informed that its main goal was “to create an interactive center for people that are evolved in the bodyart scene.”

TattooDesign.com’s article section covered a broad range of topics. For instance, you could find an article providing information on the risks of tattooing. You could also learn about early tattoo methods or read about the life of Samuel O’Reilly. O’Reilly is credited for revolutionizing the tattoo industry when he invented the modern tattoo machine.

For a subscription of $1.99, you got an opportunity to view the content on the website’s exclusive pages. If you happened to like what you saw and wanted to become a long-term subscriber, you would then purchase a subscription for $9.95 per month.

A subscription to the exclusive pages of TattooDesign.com came with several packs, including full access to a database of tattoo images, a tattoo studio directory, and tattoo suppliers.

TattooDesign.com was online until January 2019, when a visit to the website was met with the message: “You’ve found the only tattoo website you’ll ever need!” The website would go offline a little while after posting that message.

The Tattoo Artist Magazine (TAM) blog described itself as “a tattoo trade ONLY magazine.” The magazine didn’t seem overly keen to increase its subscriber base, informing visitors, “You must prove that you are in a studio in order to receive TAM.”

Today, if you try to visit TattooArtistMagazineBlog.com, you will soon notice that it is no longer publishing from this website.

Even though TattooArtistMagazineBlog.com indicated that its content was reserved for the “tattoo trade ONLY,” anyone who visits the magazine’s archived pages, whether interested in tattoo trade or not, can see some of its content.

When we went through the achieved pages, we met an article titled “Illegal tattoo artist who used a dirty toothbrush to clean his equipment is jailed after huge Alice in Wonderland etching leaves a woman’s back covered in scars.”

The article tells the story of a tattoo artist, Tony Newlands, who “drank while working in unsanitary conditions in his kitchen.” It reports that Newlands used unhygienic improvised equipment that left a woman’s back scared.

The article reports that Newlands was sentenced to four months in prison for his misdemeanors. His equipment was also seized.

The story above indicates why people who want to get tattoos need to always insist on having the job done by a licensed tattooist working in sanitary conditions. 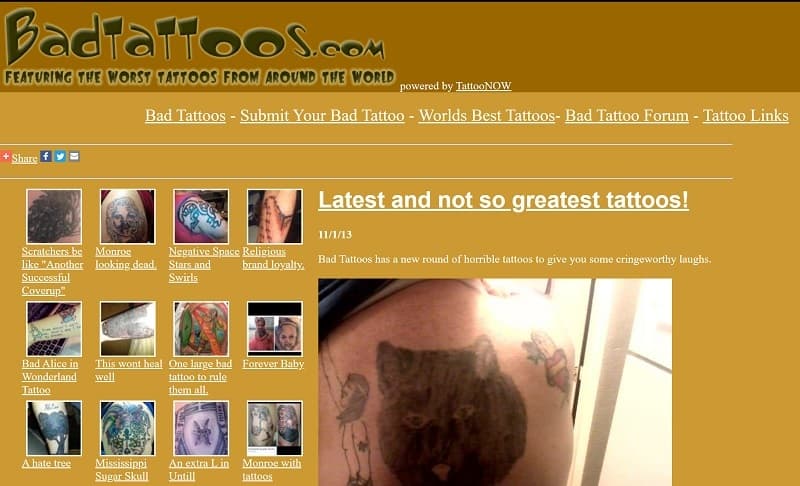 The name BadTatoos.com doesn’t leave much to the imagination. If most of the magazines and websites we feature on this list intended to exhibit great tattoos, this one wanted to do the opposite.

The website was established in 2000. It seems to have stopped updating its content in 2014 and went offline in 2018.

In describing its business, BadTattoos.com says that “this site is intended to educate, poke fun at, and pay homage to the ‘bad tattoo’.”

But why would anyone dedicate a whole website to bad tattoos? The people at Badtattoos.com have the answer: “to educate people as to what can happen if you do not do any research before you go out and get a tattoo.”

How Bad Did It Get

It looks like the people with bad tattoos didn’t have any illusions that their tattoos were good. BadTattoos.com clearly stated: “Just email us whatever you have, and if it’s bad, we will put it up.”

Once the moderators at BadTattoos.com received the bad tattoos, they would place them into one of three categories based on how bad the tattoo was: Bad Tattoo, Really Bad Tattoo, and What The ….

Judging by the number of bad tattoos the website showcased, we can say that there are many bad tattoos out there. 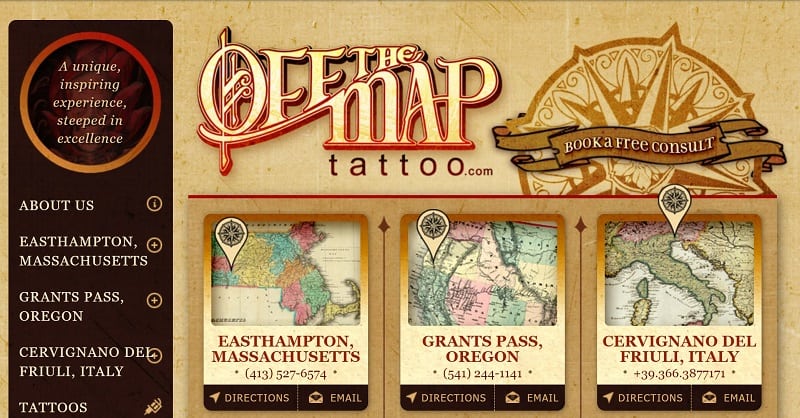 When OffTheMapTattoo.com was established in 2005, its creators had a bold promise: “We didn’t open up Off the Map Tattoo because we’re normal!”

To fulfill the promise, the people at Off the Map Tattoo indicated that they were “truly dedicated to delivering a unique, inspiring experience from start to finish.” Adding that they had “put in the hard work necessary to achieve this consistently.”

Even though the website was mainly dedicated to promoting TattooNOW’s services (the company that owned it), it also linked to various resources, including articles.

By visiting these resources, you could learn about the meanings of suicide tattoos for those reeling from the shock of losing someone who took their own life.

At one time, the website had a link to an article titled “My Neck Tattoo Got Me Hired Not Fired Hired.” The writer of the article, Gabe Ripley (the owner of TattooNow), tells the story of learning that “colorful bird tattoos put people in a good mood.” Armed with one on his neck, he says that “jobs weren’t disappearing, opportunities were growing.” 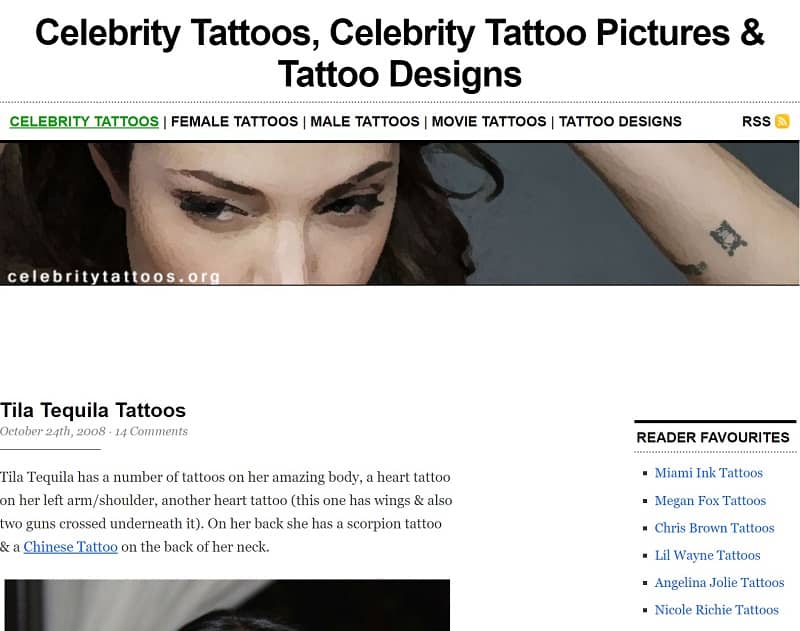 CelebrityTattoos.org was established in 2006. At this time, the site had links to sections with female tattoos and male tattoos. Users could also upload their tattoos so that other users could rate them.

By 2007, CelebrityTattoos.org had added what it called “new, improved features.” These features included a database of more than 200 celebrities, a chance to participate in discussions in the Celebrity Forum, and a section with news and stories.

The website seems to have been last updated around 2008. It went offline in 2014. 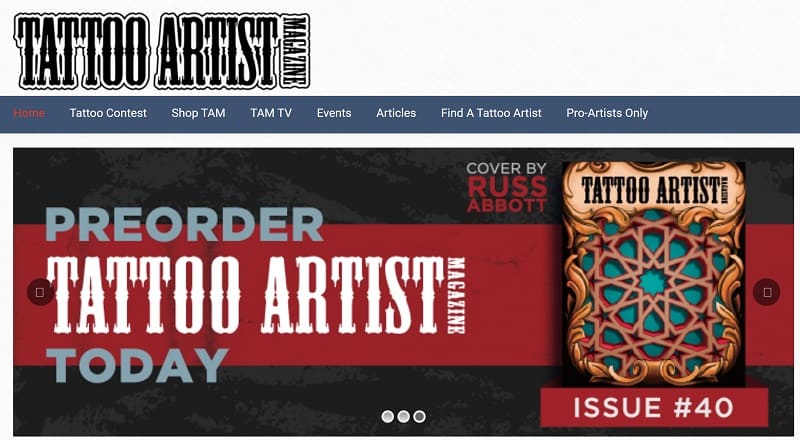 The Tattoo Artist Magazine produced four issues per annum. Readers in the US paid a subscription fee of $60.00, in Canada $78.00, and the international subscription was $84.00.

We checked out to see the type of articles that the magazine posted and found some informative articles like the one titled “The Pros & Cons Of Tattoo Conventions.” The article provides some advice for people attending their first convention: go to “those hosted by actual tattooers.”

If you follow Tattoo Artist Magazine’s history, you will realize that it was online until the beginning of 2019. Today’s attempts to visit the magazine show that it has stopped publishing from this website.

AvalonTattoo.com was the official website of a company called Avalon Tattoo Inc. The website was established in 2000.

Generally, this website seems to have been dedicated to showcasing the profiles of the main artists that worked for Avalon in San Diego, California.

AvalonTattoo.com went offline sometime towards the end of 2020. However, it looks like, at that time, it was dedicated to art galleries.